Posted in: Folding Knife Reviews by Michael on July 21, 2014
Disclosure: As an Amazon Associate I earn from qualifying purchases (affiliate links).

The Kershaw Skyline (available here) is a flipper many of you are probably very familiar with already. It’s the favored EDC knife of countless users who are constantly singing its praises. Seeing as how I already have a very good EDC blade I had been putting off purchasing the Skyline. Well, now I finally have one of my own and I would like to share the unboxing and my first impressions of this hallowed and extremely popular EDC knife. Let’s open it up and see if all the hype is merited.

Immediately after removing the Skyline from its box I was impressed with how lightweight the knife feels in hand. The spec sheet has it listed at only 2.3 ounces. Very light considering the blade length is just over 3″. This was accomplished by using only one steel liner, which is also used for the locking mechanism (liner lock). The Skyline is American made, a fact pointed out by the “MADE IN USA” engraving underneath the KAI logo on the blade. This is a huge selling point for some as the quality of knives produced in China and other countries can be very inconsistent. It’s a generalization, but the fit and finish is almost always better on knives produced in the US.

The knife has a spear-point blade shape that is hollow ground into a very sharp factory edge with an extremely fine, almost needle-like tip. That was a bit surprising. I had seen the pictures, but have never handled a Skyline in person before now. The tip is even more delicate than I expected just from viewing images from other owners. Not necessarily a bad thing. A fine point to go along with the spear point shape should make it a good performer for thrust cuts and puncturing. I just think strength may be a bit compromised with such a thin tipped blade. I’ll have to use it a bit longer and see how it holds up over the long haul, but I don’t think I’ll be as rough with this blade as I am with some of my other stouter tipped knives.

The Skyline’s blade steel is Sandvik 14c28n, a Swedish stainless steel. Really happy with this choice by Kershaw. 14c28n is a somewhat premium steel, especially for a knife hovering around the $40 price point. Most often with these inexpensive folders your looking at the lower end line of steels. Usually the typical 400, MoV or AUS series at best. 14c28n is a step above those blade steels and I believe it is exclusive to Kershaw knives, though I could be wrong about that. The edge retention is where this steel really shines when pitted against those other options. 14c28n is very comparable in quality to S30V, another popular and highly rated premium blade steel. S30V has a little bit of an advantage in edge retention as far as maintaining a workable edge, but 14c28n is easier to sharpen and holds a razor sharp edge longer than S30V.

Unfortunately the blade finish is less than impressive. I’m not a fan of the bead blasted texture at all. Not only does it look ugly and cheap (my personal opinion), but a bead blasted surface highly negates the corrosive resistant properties of stainless steel. It opens up the steel by creating very tiny micro pores where moisture can be trapped. But I knew this going in and it’s the main reason I hadn’t bothered with the Skyline until today. Just wish Kershaw had opted for a satin/polished finish instead. Or stonewash, which they do have limited runs of, but you’ll have to pay a high premium to get one of those on the secondary market.

The flipper is the only method of blade deployment. There are two small thumbstud looking points on each side of the blade. These function as stop pins and aren’t meant as an opening method, though you could try. I personally couldn’t get enough purchase on these small pins to properly deploy the blade. The flipper works well enough. It’s fast, easy and relatively smooth. I think it will become even smoother over time once the bronze washers begin to smooth and lose friction with the blade. I’ll add some lubrication as well to help in that regard. Speaking of bronze washers, that’s also a plus. Teflon washers can be just as smooth, but aren’t as rugged. I’ve actually heard stories of teflon/nylon washers ripping in the past (haven’t experienced it myself), so I tend to favor bronze washers whenever possible.

The detent is strong. The blade didn’t budge at all when I tried to “fling” it open using only downward force. When closing the blade the detent ball just grabs and sucks the blade right into the handle. A strong detent that allows you to build up force on the flipper also helps with blade deployment. That’s one of the reasons the Skyline has such quick and easy flipping action.

The blade centering is a bit off. Not so much the blade comes in contact with the handle, but uncomfortably close. Very little room for error and I worry any adjustments needed to the pivot will just make it worse. Thankfully there is absolutely no blade play to be detected so I shouldn’t have to tinker with the pivot, at least for now.

The liner lock is stout and fairly thick. Not much thinner than the thickest portion of the blade in fact, so it should prove to be a reliable lock. The portion of the liner lock in the finger groove extrudes slightly from the G10 scale to give better purchase when disengaging the lock and it also has generous jimping. Very easy and comfortable to use. Lockup is neither early nor late. Around the middle currently, but will probably move closer to a late lockup given enough time to wear in. It locks up very securely with a satisfying click. Also pleased to report absolutely zero blade play in either side-to-side or up and down directions.

The handle provides above average grip. It has a moderately aggressive texture and G10 was used for the handle scales. G10 is a great handle material for lower budget knives. It provides a “sticky” grip, high rigidity, is more temperature resistant than its FRN counterpart, relatively lightweight and very strong. Once the blade is deployed the flipper moves down into the finger choil area to form a hilt or forward guard. This further adds to the positive ergonomics and overall solid grip, which is fantastic despite a complete lack of jimping on the blade spine and no thumb ramp. Like most modern folders the Skyline’s handle has a lanyard hole which can accommodate paracord for those of us who like lanyard fobs and knife pulls for easier removal and handle extensions.

The pocket clip is the same one Kershaw uses on many of their high-end folders from the Zero Tolerance line. No issues with it at all. The clip holds the knife in pocket securely and can be reversed for either tip-up or tip-down carry. It doesn’t ride too high, but isn’t a particularly deep carry. About 1″ of the handle protrudes from the pocket in the tip-up position. Tip-down it rides a bit deeper with only about half an inch exposed. No option for left handed carry as the pocket clip screws into the steel liner and the knife only has one liner. I’m a righty, so no problem for me, but something to consider if you’re left handed.

A backspacer just under 2″ in length is installed on the spine of the knife so it doesn’t have a completely flow through design, which can make cleaning and lint removal more difficult.

Overall I have been impressed with the Kershaw Skyline in the short time I have owned it. On paper it’s technically a much superior EDC than my current favorite, the Ontario RAT 2. Better blade steel, lighter in weight and has a better handle material/texture for increased traction.

That being said, the Skyline won’t be supplanting my RAT 2 for EDC anytime in the future. There isn’t one singular reason I can point to as why I feel this way. Well, possibly the bead blasted finish. Just a multitude of admittedly minor niggles (blade finish, thin tip, bad blade centering, no jimping) that all add up. And frankly I prefer the RAT 2’s practical drop-point blade shape with its full flat grind and more substantial tip. If the RAT 2 just had a similar quality blade steel it would be no contest, but you really can’t go wrong with either.

Despite my minor complaints and personal preferences the Kershaw Skyline is a high quality, extremely lightweight and inexpensive American manufactured folding knife that most users will find ideal for EDC purposes. 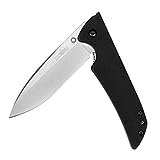