I have always had a preference for fixed blades, but in the average person’s day-to-day life they are simply not practical. I doubt many office workers could stroll into their cubicle with a BK9 hanging from the waist without someone calling the police. That’s why the majority of “EDC” knives (Every Day Carry) are small and inconspicuous folders. They don’t draw attention and as long as certain restrictions are met according to your local laws, are usually perfectly legal to conceal carry.

Reasons Why I EDC The RAT 2 Folding Knife

There are a ton of attributes I consider when choosing a knife for EDC. The most important being a suitable blade length, quality steel, lightweight, secure pocket clip, easy and quick blade deployment, generally positive user feedback, solid overall build quality and a fair price point. In my opinion the RAT 2 meets everyone of those requirements.

Ontario makes many high quality production knives, but before coming across the RAT 2 I had never owned a folding knife from Ontario. That quickly changed when I found a great deal online (under $30) and added it to my growing collection.

I had been interested in the RAT 1 before the second model was released. After actually trying one in person I soured on it due to the size and weight. Great quality knife, just a bit big and heavy for my idea of an EDC. The blade length is 3.6″ and it weighs about 5 oz. In comparison, the model 2 has a 3″ blade and weighs only 2.7 oz. The extra blade length of the model 1 is nice, but I prefer the knife that weighs nearly half as much for EDC purposes. And a 3″ blade is plenty for most light cutting tasks.

The steel found in the RAT 2 is AUS-8, a Japanese stainless steel. AUS-8 is a “value” steel that provides similar performance to 8CR13MoV, but with more carbon content. The trick here is heat treatment. Ontario has apparently perfected this on the RAT 2 because this blade is much better than any 8CR13MoV I have experienced. Not that 8CR13MoV is bad, just doesn’t have that great of edge retention. Rockwell hardness measures between 58-60, which is fairly high and provides the RAT 2 with good edge retention while still remaining very easy to sharpen. It takes a razor sharp edge in no time at all and even came with an extremely sharp factory edge. It has a full flat grind, which I have become accustom to from various Spyderco blades. Very easy grind to maintain/sharpen and works well for either shallow or deep cuts. One of the sharpest folders in this price range (under $30) I have ever used.

Blade deployment is handled by a decently sized ambidextrous thumbstud. At first I wasn’t too happy with how the blade deployed (could only get it to fully deploy on first flick about 50% of the time), but after some time (and slight adjustment to the pivot) the bronze washes have now broken in and it now opens up very fast with little effort every time. I’m sure it could be even further improved by disassembling and adding a high quality dry lubricant, but I haven’t found that necessary. Another minor thing that Ontario nailed is blade centering. It’s basically perfectly centered. I know some users don’t care too much as long as the blade performs correctly and doesn’t come into contact with the liners, but I really value good blade centering.

It’s a locking knife, which is accomplished with a solid liner lock. The lockup on the one I received is around the middle, which is fine be me. Early lockup is favored by some, but I feel a later lockup provides more strength and does of better job of securing the blade in place. I have used knives with very early lockups (around 15-20%) and it just felt very sketchy to me, as if enough force could jar the liner enough to disengage the lock. Maybe I’m wrong, but I just feel better with a more neutral lockup of around 40-50%. Of course I wouldn’t advise a knife with late lockup either, as with time the constant friction and rubbing from the liner lock and back of the blade will begin to wear away the steel. If the lockup is very late (70% or more), the lockbar won’t have extra room during this settling period. And if the liner moves too far right could put the lock in danger of failing completely.

The FRN handle is one area where the RAT 2 is a little less than ideal. FRN is an acronym for Fiberglass Reinforced Nylon, a material often used for knife handle scales as it can easily be shaped by injection molding. I would prefer if Ontario would have went with G10, but FRN is strong, very lightweight and inexpensive. Just doesn’t have outstanding grip since the material is a bit smooth. Pocket knives aren’t generally used for any tasks that I would consider hard use, so I can deal with the FRN handle in this case. They have added a slightly textured, checkered pattern to the FRN surface which helps a little with grip and traction when wearing gloves. The aggressive jimping located on the blade spine makes up for any shortcomings from the somewhat slick FRN. It provides plenty of purchase, though may become a little uncomfortable after extended use. The handle also has a medium sized lanyard hole, but to be honest I don’t often use these for folding knives. Good feature to have nonetheless.

The pocket clip is fantastic. A major reason I enjoy carrying this blade. It can be mounted in four positions, allowing for left or right handed tip up/tip down carry. It provides plenty of tension so I don’t fear losing the knife every time I need to bend down and it lets the knife ride very low in the pocket. I like this because it makes it hard to tell I am even carrying a knife. All you see is the clip and a very small portion of the handle sticking out of the pocket. 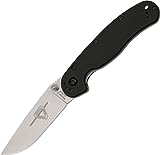 One of the biggest advantages the Ontario RAT 2 has over other similar quality folders for EDC is price. My EDC knife always suffers through a ton of use. Not really “heavy” use as far as type of tasks; just used a lot for small, quick and dirty jobs I wouldn’t bother doing with a $100+ knife. I often use it to open large amounts of packages and then have to break down the boxes afterwards. This tends to leave lots of sticky gunk on the blade from ungodly amounts of tape. I have also lost a handful of EDC knives in my time. This is why price is so crucial for me. That may not be the case for you, but I generally won’t EDC a knife that cost more than $50.

Not that I would never carry a higher priced knife. Every now and then on special occasions it’s nice to bring along an expensive, premium quality blade. Just not something I want to be doing on a regular basis. For less than $30 the RAT 2 gives me a high quality knife that I can use and abuse every day without worry. If it ever does get lost or destroyed it can be easily and cheaply replaced. That’s why it is, in my opinion, the best EDC knife for the money.

One day I was shocked to find my Rat-2 had become unsharpenable! It is all but impossible to remove steel from.

My diamond rods have lost too much material to be any help and I need to replace them.

Has anyone else ever heard of anything like this happening?