Posted in: Knife Blog by Michael on May 11, 2018
Disclosure: As an Amazon Associate I earn from qualifying purchases (affiliate links).

If you are a knife connoisseur then you’ve most likely heard of the Spyderco Paramilitary 2 folding knife. It’s no secret that the Para 2 has easily become one of the best reviewed, most popular and fastest selling folding knives on the market by both users and collectors alike.

What is it about the Paramilitary 2 that makes it so special? A handful of unique design features, quality build materials, robust compression lock and improvements over the original Paramilitary help explain why it has become a must have for all knife enthusiasts wanting a larger sized folder for everyday carry.

Lets take a quick look and discuss the various reasons for its ascent to the top of an evergrowing pile of high quality EDC knives.

Utility of the Paramilitary 2

Considering the Paramilitary 2 is of a slightly larger size than most folding knives made with an eye towards EDC, its relatively light weight for the size conveniently ensures that it can be used effectively for a wide range of functions, from hard use chores to delicate precision cutting. Whether being used as a tactical knife for defensive purposes, a heavy duty utility knife, EDC or even a food prep knife, the Paramilitary 2 is capable of getting the job done.

The super sharp blade is made from the highly regarded S30V stainless steel. S30V is known among knife enthusiasts for its toughness, souped up edge retention, high corrosion resistance and ability to take a clean, razor sharp edge, thus giving it the full package of high performance qualities. This high quality steel is widely considered to be one of the best stainless options when it comes to folders and Spyderco always does an expert job with their heat treatments. For common EDC tasks the Paramilitary 2 with its excellent drop point blade is a great knife for cutting cordage, cardboard boxes, plastic, rope, leather and wire. Whittling wood provides no challenge and it’s even at home in the kitchen where it makes a competent blade for food prep, slicing and dicing its way through tough meats, fruits and vegetables.

Since it’s made to be incredibly lightweight for it’s size and features a premium blade steel, the Paramilitary 2 truly has an extraordinary amount and range of other uses, whether it’s purposed for hunting, backpacking, bushcraft, ranching, camping etc. This knife can honestly handle pretty much any task you ask of it (outside of heavy chopping or batoning) with exceptional ease.

Design of the Paramilitary 2

The specifications of the Spyderco Paramilitary 2’s full flat ground blade include an overall length of 8.28″, a blade length of 3.4″, a cutting edge of 3.08″, weight of 3.75 ounces, blade thickness of 0.14″ and comes finished with either a satin finish or black DLC (Diamond-like Carbon) coating depending on your preference. The handle of the standard Para 2 is of pillar construction with a flow through design made of black G10 material (also available in many other colors/patterns and limited sprint runs with unique blade steels) covering stainless steel liners. The handle length is 4.81″  and thickness is 0.46″. It has full steel liners that have been strategically milled out to reduce weight without compromising structural integrity.

The ergonomics of the Spyderco Paramilitary 2’s handle are fantastic as well, as Spyderco went with a 50-50 handle/blade choil design for versatility and excellent precision control. Since the 50-50 finger choil is formed from a combination of the blade stock and knife handle, it gives a greater amount of space to either grip the base of the handle in a normal grip for extended reach or to move your hand up the handle into the choil for more control. The handle ergonomics and shape are now designed for a variety of grips; a nice improvement over the original. Jimping is located on both the thumb ramp and choil. The jimping is fairly small cut yet highly functional. It creates very little discomfort even when applying heavy pressure. Some of the best implemented jimping you will ever use. The whole knife is held together using three screws. Two T8 screws for the handle and a T10 for the pivot screw.

The Para 2 pocket clip employs a large, standard Syperco hourglass shape clip with polished satin finish than can be a touch on the shiny side (black blade version has also has blacked out hardware). The clip offers a somewhat deep carry, 4-way positionable use (left and right handed tip-up/tip-down, uses T6 screws for attachment) and good retention for a secure hold to the pocket. It has the perfect amount of tension. Easy to get in and out of the pocket without excessive damage like some clips that just eat through pant material for breakfast. The lanyard hole is enormous. Roughly double the size of a standard Spyderco lanyard hole. No problems fitting a strand or three of 550 paracord through that thing.

As for blade deployment and the locking mechanism, Spyerco has employed a compression lock matched with a oversized thumb hole opener. With a larger than average “Spyder Hole” (designed for easy one-handed operation with a gloved hand) and duo of very smooth phosphor bronze washers, blade deployment is quick and effortless. The compression locking mechanism is highly favorable over a traditional liner lock for its incredible strength and improved safety. When releasing the lock your fingers are positioned on the spine of the knife rather than right below the blade so there is basically no risk of cutting yourself when closing the blade. It resembles a reverse liner lock. Though it may take someone who has never used this type of lock a bit more time to adjust, the performance of Spyderco’s compression lock is well worth the effort. I can’t say for a fact, but the compression locking system also seems to be stronger than a typical liner lock.

Value of the Paramilitary 2

If all the benefits of the Spyderco Paramilitary 2 I just laid out aren’t enough to convince you of its superiority, then the price and value for the money alone will seal the deal. The Para 2 comes in right around $125 or less depending where you buy. Don’t get me wrong, that is not cheap by any means, but once reaching the $100 price point you generally leave the budget market behind. Most knives by other brands approaching quality levels exhibited by the Spyderco Paramilitary 2 will set you back at least $200; likely a lot more. And for the final icing on the cake, it’s US made in Spyderco’s Golden, Colorado plant. Whether you are bothered or not by the country where a knife is manufactured, the fact is knives produced in the US are generally of much higher quality than Chinese counterparts. 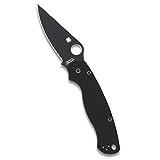 With such an exceptional value it’s no surprise at all to see why the Paramilitary 2 is one of the most popular and fastest selling knives on the market, especially considering it’s almost inexhaustible uses, high performance, premium steel, comfortably contoured handle, near perfect blade shape and one of the toughest locks found on a folder. All of these factors contribute to basically guarantee the Spyderco Paramilitary 2 its position at the pinnacle of hard use EDC folding knives. I would say it is the single best production knife you can get without spending custom or mid-tech prices, which start around $250 and go up quickly from there. It will no doubt be a bestseller for a long time to come. At least until Spyderco answers the prayers of many for the second time and releases a Paramilitary 3. 🙂

Update: February, 2017 – Spyderco has indeed followed through with the rumors and released a spiritual successor to the Paramilitary 2. It’s called the Spyderco Para 3. It retains many of the traits that made the Paramilitary 2 such an iconic knife while reducing the size (3″ blade length) and weight (3.4 ounces) for a more EDC friendly form factor.

In Stock Status and Looking Out for Fakes

There are two big problems circling the Paramilitary 2 and neither of them are with the knife itself. Four years later after the initial release in 2010 and the knife still sells out quickly, usually within days when a trusted shop actually does have them in stock. The best method for catching them in stock is to follow trusted knife dealers on Facebook and other social media platforms. Many will announce ahead of time when they will be expecting new shipments. Unfortunately Spyderco has been unable to keep up with demand for any sustained length of time. It’s simple supply vs demand. That’s what makes buyers susceptible to the next issue. Fakes.

Like many products that are in high demand you see people willing to take advantage of the situation by scamming unsuspecting buyers with cheap knockoffs passed off as the real deal. Be extra cautious when shopping for the Para 2. Only buy from legitimate retailers such as BladeHQ, Amazon (not 3rd party, but shipped and sold from Amazon) or GPKnives. If buying from an individual or bidding on an auction only deal with sellers who have a good reputation and a long history of positive feedback. If you suspect your Paramilitary 2 may be a fake I suggest watching this video by NeptuneKnives on YouTube that shows an in-depth comparison of a fake versus the real deal.