This Ka-Bar Combat Kukri is a modernized version of the legendary Gurkha weapon. It offers the best of both worlds: the fierceness of the famed Nepalese fighting knife and the reliability of a no-nonsense survival knife.

Ka-Bar is one of the most reputable US brands and this model in particular is manufactured in Olean, New York. It is smaller than the full-sized Ka-Bar Kukri and Machete, but it could definitely hold its own. If anything, the smaller profile and lighter weight makes it just the right size for combat carry.

The blade of the Ka-Bar Combat Kukri features a 1095 Cro-van Steel with full tang construction. The material is a strong carbon steel that is easy to sharpen. It is one of Ka-Bar’s top choices in steel, which has an HRC hardness rating of 56 to 58.

The overall length of the Ka-Bar Combat Kukri is 13 3/8″, while the blade length is 8 1/2″. It weighs 0.80 lb. and has a full tang fixed blade with a thickness of 0.165″. The cutting edge has an angle of 20 degrees, which is very common among production knives and not difficult to hone with most sharpening systems and whetstones.

The handle is made of Kraton G elastomer; it is a non-slip material that ensures top-notch grip control which is especially handy during active use. Five grooves are milled 360 degrees around the handle, which contributes to a very strong and comfortable grip when using this knife. It is also moisture (water and sweat) and chemical resistant, and is nearly impervious to ordinary wear and tear, unlike tradition kukri knives with wood or bone handle material. It does include a forward finger guard, but considering this is billed as a “combat” knife I would have preferred to see a full hand guard for better protection.

The sheath is made of a heavy-duty polyester which has proven to be very durable and weather resistant. It has riveted leg lashing holes that could be used to keep the knife securely strapped to your leg. Honestly, it’s not the greatest sheath you will ever wear, but does an adequate job of holding the kukri for normal carrying purposes.

The blade shape is close to the traditional Ghurka kukri, a design which enables the user to deliver maximum strength at the point of impact.  That’s where the similarities with a tradition kukri knife ends, as the Ka-Bar Combat Kukri has a more modern style that appeals to the Western market. This knife features an epoxy powder-coated non reflective black blade. This type of blade finish is proven to be more durable and effective against rust resistance when compared to cheaper blades with a “painted on” black coating or worse, no coating at all. The blade is available in plain edge only. The handle also features a protective guard that help prevent your hand from slipping forward onto the blade. Thrust cuts with a blade of this size would be extremely dangerous without the guard.

The knife itself is easy to use, comfortable, and fast. The Kraton handle provides a secure grip with little to no hot spots. This combat kukri is also smaller than its full-sized kukri counterpart from the same manufacturer, so it is also lighter and easier to wield in a confined location.

Uses for the Ka-Bar Combat Kukri

The Ka-Bar Combat Kukri is powerful enough to be used for a variety of purposes. While true that it is primarily marketed as a combat knife, but it could also be used as a multi-purpose survival tool. It would be right at home skinning an elk, digging a water hole and slicing through underbrush. In the right hands it could be an extremely useful survival knife. It could even be used for food preparation in a pinch.

What Users Think of the Ka-Bar Combat Kukri

As with most knives from Ka-bar, this combat Kukri is quite well-made. The fact that it’s manufactured in the US also puts a lot of users’ mind at ease, particularly those who know the value of good old American craftsmanship. It is razor sharp even out of the box, although some users suggest that the knife be sharpened first. It is also quite strong so it could easily cut through quite a lot of things.

Since the knife is easy to carry and to use, it could be extremely handy for survival in the wild, or other settings that would require usage for an extended period (i.e. trimming branches). It could also be easily concealed because it’s not so bulky. A lot of hardcore knife enthusiasts and those who just need a utility knife are impressed with the craftsmanship and the design that allows for a wide range of applications.

Any Criticisms or Negative Feedback?

Keep in mind that the Ka-Bar Combat Kukri has its own distinct style while being considerable smaller than a typical kukri. Also, while lots of users have been raving about the knife’s quality, there has been some negative feedback about the sheath. Many knife enthusiasts and collectors were looking forward to a combat knife with Kydex sheath were not very happy that this kukri’s sheath is made of polyester (with a plastic liner) and rather cheap looking.

The Combat Kukri from Ka-Bar is a fantastic fixed blade knife with a large cutting edge well suited for combat, wilderness survival and camping. There is a reason that Ka-Bar fighting knives continue to be a favorite among Marines today. After all, it does look like the Ka-Bar Combat knives like this Kukri are upholding Ka-bar standards, what with the extreme durability and top notch craftsmanship. The sheer number of adventurers, outdoor enthusiasts, survivalists and knife collectors who continue to trust in the brand after having experienced using the Ka-Bar Combat Kukri is proof of that. 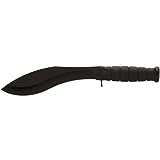