Posted in: Knife Blog by Michael on August 8, 2014
Disclosure: As an Amazon Associate I earn from qualifying purchases (affiliate links).

The Kershaw CQC-6K I ordered last week finally arrived. Now it’s time for an unboxing. The CQC-6K came in a very nice box with the Emerson skull printed on the top of the box. It states “Designed by Emerson” and “Built By Kershaw” on the side, giving a clear indication of what to expect.

Along with the typical paperwork Kershaw has included a packet containing three additional screws. The hardware also happens to be standard Phillips and flat head screws instead of torx. A nice touch. I wish more makers would do this, especially with budget knives as it’s not uncommon for these “economical” blades to include somewhat soft screws and hardware that can be easily stripped. Not fun when this happens, but at least you’ll have replacements on hand.

When removing the Kershaw CQC-6K from it’s packaging the first thing I noticed was the weight. It’s a heavy knife (specs list it at 5 oz.), but I knew this going in. Definitely not something I would personally EDC, but some will appreciate the robust build quality over a lighter weight. It’s a tough knife to be sure.

Blade deployment is unfortunately slow, cumbersome and tedious if you don’t use the wave opener. It’s very stiff. Almost feels like an old slipjoint knife. I adjusted the pivot as loose as it could possibly go without adding any blade play, but that didn’t help much. Hopefully deployment performance will smooth out to a more acceptable level with time.

On top of that the lock bar is very rigid, rough on the thumb and often sticks. When this happens it requires a lot of pressure to disengage the lock. After only a few minutes playing with the knife my thumb was already sore. Lockup is also a bit late. Around 60%, but it’s a very strong lock that should hold up well as long as it doesn’t migrate to far into the blade tang. Also note in the lockup picture below the CQC-6K uses nylon washers. I would have preferred bronze washers for durability. Makes me wonder if they could have something to do with the less than stellar deployment action.

It’s not all bad though. The fit and finish is wonderful for a knife costing as little as the CQC-6K (I paid $25, it averages under $35). The modified clip-point blade, with its stonewashed grinds and satin flats, really stands out. A beautiful blade design not often seen in this price range. Pictures don’t do it justice.

Using the thumb disk for blade deployment is a chore. You have to use a real deliberate and slow action to open the CQC-6K with any consistency. I can just barely flick the blade open with a generous amount of wrist action to help it along. Thankfully the wave shaped opener couldn’t be easier. It works flawlessly. I’ve tried it a couple dozen times and it worked perfectly without fail on each attempt.

The pocket clip is excellent. Enough tension to securely stay in place, but not so much it will ruin a pocket quicker than normally expected. It’s bead blasted with the Emerson skull logo printed on the clip in black. Reversible for left or right hand tip-up carry. The clip also acts as a lock bar stabilizer to prevent it from being overextended in the wrong direction.

The blade was decently sharp right out of the box. It has a good working edge that can easily slice printer paper, but it’s not quite hair shaving sharp. Doesn’t matter much as the steel is 8Cr14MoV, which is notoriously easy to sharpen so you can quickly get the edge as sharp as your skills with a whetstone or ceramic rod will permit. Blade centering is pretty much dead center.

The handle provides a comfortable grip that can accommodate a full four finger grip with room to spare. Jimping isn’t that good. It’s very rounded and smooth. It helps a little with traction, but could have definitely been improved. The side with the G10 scale provides good grip with a medium textured surface.

My first impressions of the Kershaw CQC-6K is a bit of a mixed bag. For how little I paid ($25) the CQC-6K is a very high quality, good looking pocket knife with a classic Emerson design and wave opener that functions as it should. It’s a knife I like to look at, but find painful to use. Literally. Maybe the blade will smooth out enough overtime, but if I can’t find a way to make the lock bar easier to disengage without sticking half the time I will be very disappointed. 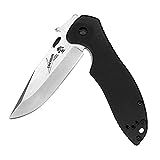 I’m going to use the knife for a few more weeks after which I will get a more in-depth review posted ASAP, so check back in the future for my final thoughts.